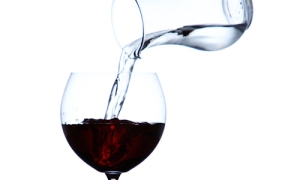 John 2:1–11 (ESV) — 1 On the third day there was a wedding at Cana in Galilee, and the mother of Jesus was there. 2 Jesus also was invited to the wedding with his disciples. 3 When the wine ran out, the mother of Jesus said to him, “They have no wine.” 4 And Jesus said to her, “Woman, what does this have to do with me? My hour has not yet come.” 5 His mother said to the servants, “Do whatever he tells you.” 6 Now there were six stone water jars there for the Jewish rites of purification, each holding twenty or thirty gallons. 7 Jesus said to the servants, “Fill the jars with water.” And they filled them up to the brim. 8 And he said to them, “Now draw some out and take it to the master of the feast.” So they took it. 9 When the master of the feast tasted the water now become wine, and did not know where it came from (though the servants who had drawn the water knew), the master of the feast called the bridegroom 10 and said to him, “Everyone serves the good wine first, and when people have drunk freely, then the poor wine. But you have kept the good wine until now.” 11 This, the first of his signs, Jesus did at Cana in Galilee, and manifested his glory. And his disciples believed in him.

This is perhaps one of the most recognizable of all Biblical passages. It is used ubiquitously at weddings, and as a symbol of how Jesus was both attentive to the everyday needs of a moment, as well as the Lord of glory in performing the actual miracle. Verse 11 says this was the first of His signs. And that in it He made His glory known. But what exactly was it a sign of? I think the answer lies in seeing this account as the exposition of a verse back in chapter 1: John 1:16–17 (ESV) — 16 For from his fullness we have all received, grace upon grace. 17 For the law was given through Moses; grace and truth came through Jesus Christ.

In other words, Jesus had not come to bolster or fix the corrupted Mosaic economy. He didn’t come to repair the Judaism of the Pharisees and the Sadducees. He came to usher in the New Covenant, not to patch up the old one. He didn’t make more wine out of the existing wine, but created it anew. In Jesus, we have grace – New Covenant grace – atop of or superseding – the grace of the Law.  The figure is not hard to discern.

As the master of the feast noted to the bridegroom, “you have kept the good wine until now.” Yes, under the Mosaic economy the blessing of God was made known to and poured out upon His people. But He was keeping the best until last. The Law and the prophets were never intended to be an end in themselves, but only a foretaste of the “good wine” to come. The “best” wine, the New Covenant could only come through the miraculous work of the incarnate Son of God – Jesus Christ. As perfect and holy and good as the Law of Moses was, it could not save. O, it surely did its appointed work in its time – but it was not the fullness to come. That, would have to wait the incarnation. Not until Jesus would come to spill His own blood on our behalf – not until His personal, incarnate intervention could we have the riches, the fullness that best of the grace God had to give. All of His blessings are good – but not all of them are the fullness. That comes in the One in whom dwells all of the fulness of the Godhead bodily.

Beloved, never settle for rules, regulations, laws and religion – even given by God Himself as sufficient. Even the divinely given Law was not the end. Look only to the crucified Lamb of God. Only in Him is the wine which never runs out – which is sufficient for our every need – in an overabundance of grace. Only in Him is the fulfillment of the Old Covenant promises. Only in Jesus is that salvation which is merely tasted in the Old. Now the New has come. And only by the miracle of grace wrought at the hand of Jesus is the salvation we long for fulfilled. He, is the fullness of God. The fullness of our salvation. The best wine had come at last. Never go back. When you are tempted to, remind yourself, the old wine has run out. And only Jesus can meet the need.