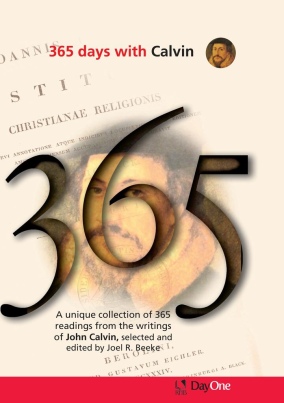 Yesterday, Pastor Jim preached to us out of 1 Cor. 3. In doing so he helped us to see Paul’s diagnosis of the core Corinthian problem, and then Paul’s treatment for it. He gave us a central truth and then 2 implications. One of those implications was how we must be careful in instructing one another in the faith – what we build into other’s lives and our own, in spiritual terms. That what we pass on to others must be ready to stand the test of God’s fire in the last day. How it must accord with the foundation we have in Christ. Part of that is to be careful about what we recommend to others as resources for their souls. This is an issue the Elders at ECF consider all the time in making book and resource recommendations to you all. We want to build into your lives things that will stand the test not only of time, but of eternity.

It is in that spirit that I make a recommendation to you today: a fine little volume titled “365 Days with Calvin.” It is a wonderful little daily devotional where Joel Beeke takes just a snippet from Calvin’s comments on scripture in bite-sized portions that are wonderfully useful. Now some haven’t the foggiest who John Calvin is, or have preconceived negative or positive views of him. But in this volume, Calvin’s usefulness as an expositor of God’s Word comes through with his Pastor’s heart in a wonderfully useful and accessible way. And I submit the following from yesterday’s reading to whet your appetite. Enjoy!

Touch not; taste not; handle not; which all are to perish with the using; after the commandments and doctrines of men. Colossians 2:21–22

Paul points out to what length the waywardness of those who bind consciences by their laws is likely to go. From the very beginning they are unduly severe; hence Paul begins with their prohibitions not simply against eating but even against slightly partaking.

After they have obtained what they wish, they go even further than the command, declaring it unlawful even to taste what they do not wish should be eaten. At length they make it criminal even to touch such food. In short, once leaders have taken upon themselves the right to tyrannize people’s souls, there is no end of daily adding new laws to old ones and starting up new enactments from time to time. Hence Paul admirably admonishes us that human traditions are a labyrinth in which consciences are more and more entangled; nay, more, they are snares, which from the beginning bind people in such a way that in time they are strangled.

In sum, the worship of God, true piety, and the holiness of Christians do not consist of what they drink and eat and wear, for those things are transient, liable to corruption, and perish by abuse.

Second, Paul adds that such observances originate with men and not with God, who, by his thunderbolt prostrates and swallows up all traditions of men. Paul says God does this because “Those who bring consciences into bondage do injury to Christ, and make void his death. For whatever is of human invention does not bind conscience.”

For meditation: In the church today, we create many laws and think that obeying them recommends us to God. We even bind them upon the consciences of others. But some of those laws are simply the creations of men and cannot gain us favor in God’s sight. Such favor can only come through the Son, Jesus Christ. Man-made laws often hinder people in pursuing salvation.