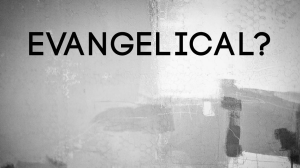 Following a short essay by Bishop J. C. Ryle, a leading evangelical Anglican of the 19th century, we have seen that Evangelicalism isn’t what most would think of today when they hear that word in the public sector. In a sense, we’ve let others define that term for us rather than insisting on making it clear what WE mean by it. And to be fair, many self-professed Evangelicals have poured into the current public perception by doing what they do in the political and social realms in the name of Evangelicalism. When in fact those endeavors may have more to do with their brand, than the core features we’ve been discussing.

The great churchman of the 16th century Richard Hooker noted that when people have a cause and a particular slant in controversial issues or those they are greatly exercised over, they tend to make that issue an all-or-nothing proposition before long. And in doing that, they then pour everything into it in such a way that their very Christianity rests in the issue itself. And as a result, those who do not agree with them on this issue are suspect even in their Christianity. So for some, a representative republic as a form of government or free-market capitalism become synonymous with Biblical Christianity – and anyone holding to anything else in any way can’t even be a Christian! Thus in the process, Evangelicals end up deconstructing our own Evangelicalism.

All that to say, that we need to get back to real basics here. So far we’ve seen the first 3 leading features of Evangelical Religion – and today our writer sets forth the 4th one.

a) The first leading feature in Evangelical Religion is the absolute supremacy it assigns to Holy Scripture, as the only rule of faith and practice, the only test of truth, the only judge of controversy.

(b) The second leading feature in Evangelical Religion is the depth and prominence it assigns to the doctrine of human sinfulness and corruption.

(c) The third leading feature of Evangelical Religion is the paramount importance it attaches to the work and office of our Lord Jesus Christ, and to the nature of the salvation which He has wrought out for man.

(d) The fourth leading feature in Evangelical Religion is the high place which it assigns to the inward work of the Holy Spirit in the heart of man.

Its theory is that the root and foundation of all vital Christianity in anyone, is a work of grace in the heart, and that until there is real experimental business within a man, his religion is a mere husk, and shell, and name, and form, and can neither comfort nor save. We maintain that the things which need most to be pressed on men’s attention are those mighty works of the Holy Spirit, inward repentance, inward faith, inward hope, inward hatred of sin, and inward love to God’s law. And we say that to tell men to take comfort in their baptism or Church-membership, when these all-important graces are unknown, is not merely a mistake, but positive cruelty.

We hold that, as an inward work of the Holy Ghost is a necessary thing to a man’s salvation, so also it is a thing that must be inwardly felt. We admit that feelings are often deceptive, and that a man may feel much, or weep much, or rejoice much, and yet remain dead in trespasses and sins. But we maintain firmly that there can be no real conversion to God, no new creation in Christ, no new birth of the Spirit, where there is nothing felt and experienced within. We hold that the witness of the Spirit, however much it may be abused, is a real, true thing. We deem it a solemn duty to be no less jealous about the work of the Holy Ghost, in its place and degree, than we are about the work of Christ. And we insist that where there is nothing felt within the heart of a man, there is nothing really possessed.

To open his point a bit more, we can have a great many feelings and experiences which are nothing in terms of the Holy Spirit’s work in our souls – but at the same time, if He has and is doing a work there, it is a felt work. We experience something. For instance, if we have not been grieved over sin because it is offence against God and not just because of its ill effects; if we have no true love for Christ, having been melted by His love and sacrifice on our behalf; if there is nothing of anticipatory desire for Jesus’ return and our being gathered to Him; if there is nothing of an inward communion with God brought about by union with Him in the Holy Spirit, then we are not simply not Evangelicals, we are not born again.

You MUST, be born again.