I’ve posted various book reviews on our Church web site – http://www.ecfnet.org But thought it might be good for conversation to repeat them here as well. 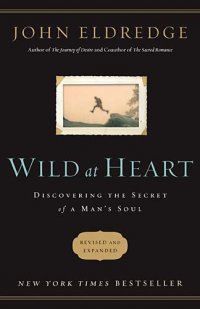 Wild at Heart is the train wreck that occurs when Psychology drives Theology instead of it being the other way around. What appears to be a sincere attempt to answer some basic questions about why things are the way they are in our culture, specifically why men are the way they are, careens way off course and time after time confuses and confounds things errantly. Extant desires are confounded with created ones; the author’s own longings (however legitimate or illegitimate) with every other man’s; liveliness with life; lack of aggression with demasculinity; lastly, and most dangerously, sinful tendencies as expressed by fallen males, as masculinity itself.

But I’m getting ahead of myself. Lets back up.

Wild at Heart is neither John Eldredge’s first nor only book. Thomas Nelson also publishes his Waking the Dead, The Sacred Romance (which Eldredge co-authored with the late Brent Curtis), The Journey of Desire and Dare to Desire, along with some other assorted publications. He spent a dozen years speaking and writing for The Focus on the Family Institute and is currently Director of Ransomed Heart Ministries in Colorado Springs, CO. Ransomed Heart is a ministry Eldredge founded as a “teaching, counseling, and discipling fellowship devoted to helping people recover and live from their deep heart.” His autobiographical sections let you know that he has been a practicing counselor as well.

I confess that I struggled a lot with this book. Knowing its intense popularity I wanted to find much redeeming about it. Fortunately, I can say that his sections on “Healing the Wound” were immensely insightful and could be of great help to some. What makes this somewhat frustrating however, is that those sections alone do not and cannot justify the balance of the book. I wish he had covered that material under a separate cover which I then could recommend. He has some very important things to say. Sadly, in this book, they are buried deep inside some very convoluted notions of truth and reality.

I am tempted at this point to just give a listing of citations which are disturbing. They are many in my estimation. But I have decided that the better route is simply to state at the outset, what is (I believe), the underlying false presupposition which drives virtually all of the errors from cover to cover. The root problem is this: Eldredge has absolutely no concept of what man was before the Fall, nor what he is to be after glorification. As such, he views man through the distorted lens of the Fall, while trying to identify normalcy in the distortion. Like an astronomer with a speck on his lens which he confuses with an actual celestial object in the quadrant of space he is observing. He mistakes many of the fallen tendencies of man to be what God designed. They are the norm, simply misdirected or misinformed or misfiring. This is best exemplified in his repeated appeals to aggression in men. Something he thinks we need to stimulate more. Aggression coupled with a list of stereotypical macho expressions of masculinity that are informed more by his observations of men (fallen men), than the Bible. But more about this later.

Page after page echoes with his own exploits hunting, fishing, rock climbing, whitewater rafting etc. etc.. One comes away with the message, that any man not engaged in such activities – is not a “man”. A charge easily corroborated by the “Wild at Heart: A Band of Brothers” multi-media package advertised at the rear of the book. I quote: “Five friends. Eight days. No scripts. Here’s what it looks like to live in the message of Wild at Heart in a band of real brothers. John and his band of brothers spent eight days shooting this series on a ranch in Colorado. Horses. Rappelling, Whitewater rafting. Fly-fishing. And some of the most honest conversation you will ever hear from men.” For Eldredge it seems – masculinity is bound up with these things. His world requires them. The Statesman lives of a Joseph or Daniel for instance would not be an environment where real men could thrive and live for him. In fact, quoting Howard Macey, he comments that “The spiritual life cannot be made suburban.” Sorry you stock brokers, insurance salesmen, scientists, academics and pastors out there, I guess you can’t be Christian men unless you hunt and fish on the weekend.

For Eldredge, “The whole crisis in masculinity today has come because we no longer live in a warrior culture, a place for men to learn to fight like men.” Huh, I could have sworn that the scripturally diagnosed problem with men is that they aren’t Christ-like. But then, for Eldredge, things like retaliation (his word, not mine – I would have chosen self-defense or self-protection) and being “dangerous” IS Christ-like. Counseling his son Blaine in the aftermath of being pushed down on the playground by a bully at school, he tells him: “The next time that bully pushes you down, here is what I want you to do…I want you to get up…and I want you to hit him…as hard as you possibly can.” His rationale? “Yes, I know that Jesus told us to turn the other cheek. But we have really misused that verse. You cannot teach a boy to use his strength by stripping him of it. Jesus was able to retaliate, believe me. But he chose not to. And yet we suggest that a boy who is mocked, shamed before his fellows, stripped of all power and dignity should stay in that beaten place because Jesus wants him there? You will emasculate him for life.” Isn’t it interesting that the idea of teaching his son to choose not to retaliate doesn’t even enter the picture? The logic is confused at best. Anti-Scriptural at worst. Thus he continues “At that moment, Blaine’s soul was hanging in the balance. Then the fire came back into his eyes and the shame disappeared. But for many, many men their souls still hang in the balance because no one, no one has ever invited them to be dangerous, to know their own strength, to discover that they have what it takes.” This is deeply disturbing. For to be a man, to “have what it takes” means I cannot choose to turn the other cheek. I cannot pray for my enemy. I cannot choose as Christ did. No, I have to be ready to swat him down in retaliation.

Equally disturbing if not more so are his numerous referrals to what God says to him. In one section where after a particularly draining and difficult trip in England, he tells how he poured out his heart to God in his journal. His prayer is not disturbing, the “This is what I heard” in response part is. Ostensibly God replies to him “You are Henry V after Agincourt…the man in the arena, whose face is covered with blood and sweat and dust, who strove valiantly…a great warrior…yes, even Maximus.” And then “You are my friend.” But as seems true throughout the book, Eldredge himself is striving so much after the affirmation of his own masculinity, that these – not the words of God IN the Word of God are the things which mean the most to him. And of course the question must be asked – what if it wasn’t God speaking at all? What if it was just self, or the enemy building self-confidence over trust in Christ alone? What then? He never even approaches the subject.

Another exceedingly troubling section is where he seeks to buttress his presuppositions about men desperately needing adventure, by locating the origin in God. Here, he asserts that “God loves wildness”, “God is a person who takes immense risks”, “God seems to fly in the face of all caution”, and that “God’s relationship with us and with our world is just that: a relationship. As with every relationship, there’s a certain amount of unpredictability, and the ever-present likelihood that you’ll get hurt.”  Then, whether or not he caught himself, or someone else pointed out to him the inevitable conclusion of such statements – he tacks on (in what appears to be an awkward afterthought) “I am not advocating open theism.” Call it (or don’t call it) what you will, it makes the same base assertions as open theism. And that is troubling indeed.

I will pass over some other strange ideas without much comment. Ideas like: Satan being afraid of men recovering their masculinity (apparently instead of his fearing our growth in godliness); preoccupation with every man needing to fight some battle; his contention that when Jesus confronted the Gerasene demoniac “the first rebuke by Jesus doesn’t work. He had to get more information , to really taken them on”; that (quoting a friend) “a woman who is living out her true design will be valiant, vulnerable, and scandalous” – scandalous?; or after viewing nature (in its current fallen state mind you) he concludes “God made all this, pronounced it good, for heaven’s sake. Its his way of letting us know he rather prefers adventure, danger, risk, the element of surprise. This whole creation is unapologetically wild”. I leave those to others to sort out because I realize that this review must come to an end. So let me return once more to what I believe is the real problem with Eldredge’s entire premise.

The underlying false presupposition, upon which builds the framework by which he contextualizes everything, is stated in his own words: “The core of a man’s heart is undomesticated and that is good.” Thus, “in the heart of every man is a desperate desire for a battle to fight, and adventure to live, and a beauty to rescue.” This is why normative masculinity in his estimation will “grow bored of games that have no element of danger or competition or bloodshed.” Might I simply say, that based upon this, Eldredge is going to hate Heaven. Not because Heaven will not be gloriously adventuresome in the sense of unending discovery – but because there will be NO violence after sin is eradicated. No aggression. No war. No danger. Peace and joy and the glory of a sinless life were ours before the Fall, and the Father will restore these and more.

Absent from his thinking is the fact that there is no competitiveness or adversarial arrangement in the Godhead. Such things are not in Him ontologically and were not given to us as such. Yet he assumes we will still have these fallen propensities in Heaven rather than being fully conformed to Christ’s image. For if he considers our spiritual maturity as tied to these claims of wildness – they must remain as proper. He doesn’t seem to understand that the enemy is aberrant, and unnatural. Our present existence with its sin-wracked reality is a perversion of life as God gave it. The lion will lay down with the Lamb and the child will play on the adder’s nest without fear there. Eldredge’s notions of wildness will be done away with. They are the result of the Fall. But he has no category for this. Bloodshed ALWAYS implies the involvement of sin on some level. Sin will be put away. He seems to possess no awareness of what man’s existence was before sin entered the picture, and what it will be like after sin is completely vanquished – and that what lies between – the present course of human history, is everywhere marred by sin’s corruptions. Eldredge doesn’t appear to know that God’s end for us, is to be able to beat our swords into plowshares, not the other way around.