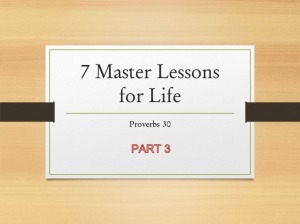 THE AUDIO FOR THIS SERMON CAN BE FOUND BY CLICKING HERE

Only Christ can fill the voids

Only in Christ can the mysteries of life be explained – for all of God’s wisdom is summed up in Him.

Only in Christ at His coming will the unfitting effects of the Fall be righted.

There are 3 more Master Lessons to look at in this passage – to bring our total to 7.

Don’t be surprised if some of life’s best answers are illustrated right in front of you.

These four speak to one of the most primal realities which any of us faces in life: We hate the thought of, let alone the experience of -being powerless.

People we cannot impact infuriate and terrify us.

When they won’t listen to us or when all of our arguments seem to simply bounce off of them.

When our best attempts at moving them are absolutely impotent.

When a husband or wife seems to be impervious to changing no matter how much you hurt.

When children won’t respond to discipline and Parents won’t take the time to consider their children’s point of view.

Even what is in itself a wise things to do – like the purchase of insurance is at least in part an attempt to hedge against the inevitable. An attempt to bring peace over things we know we cannot control: accidents, death, health, etc.

So Agur points to these 4 examples: 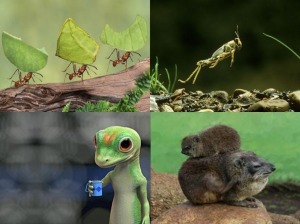 Ants have no “power”. They are not strong. How do they manage in a world where they are virtually the most powerless of all?

They do what they can – when they can.

And then they are cast upon God.

The rock badgers or mountain mice – tiny and frail – how do they survive? They’ve learned the secret of hiding in those places that are strong.

A lesson to us to find our refuge in the strong tower of God’s name, rather than in our own strength or ability.

The locusts. They are just bugs. They can be flicked off with the tiniest finger. Blown about with the slightest wind. Yet entire regions can fall beneath the plague when these feeble little creatures – without a leader – band together and make an army none can defeat. A picture of our being bound together with the host of other powerless Christians, who apart from any earthly King, yet march on for Christ’s kingdom, and have brought down entire empires. The unity of the powerless sons of God – relying on the power of their God.

And lastly, the lizard – or as some translations have it – the spider: Both little, frail, easily caught and extinguished.

Yet in their usefulness, are not only found but allowed to live in the finest places, in King’s palaces.

Their natural capacity to rid their environs of multitudes of other pests, makes a way for them when they would not be tolerated naturally.

So that Christians, bringing Biblical ethics and goodness and safety to those around them, though without any power in themselves, are found to be a needed useful part of society.

Even the most vicious opponent recognizes that when Christians actually live up to the standard of God’s Word, the world around them is better for it.

Power is sought by all of us.

Power over a cheating spouse, an abusing superior, a stronger opponent, the indefatigable waves of life.

But power over things in life is not what we need.

Trust and confidence in the One who rules and reigns over all, that is what we NEED.

Confidence that He has made us as we are.

That His hand is upon us.

That the gifts and capacities He has placed within us, are more than a match for the need of the hour, if we look to Him.

That we can run into Him and be safe.

That we are our Beloved’s, and He is ours, and that is enough.

Take a lesson from the creatures who tho smallest and frailest in creation – not only live but thrive – because The Creator provides for them.

And as Jesus told we who follow Him: Are we not of more value than MANY sparrows, who are worth almost nothing?

Not everything rises to the level of a conspiracy, even though there might be great and startling similarities.

Our driving need to make sense of the things we experience in life, can easily lend itself to drawing connections between dots that ought not exist.

It is one of the prevailing reasons why we are so quick to jump to conclusions about people’s motives.

EXAMPLE: Politically – on the Left – there are accusations of “a vast right-wing conspiracy”

And on the Right there are looming images of the Illuminati, the Bilderbergers and massive global conspiracies of untold power.

But the truth is – what we have is a commonality of fallenness which ALWAYS seeks to run the world as much as possible.

Every empire from the ancient Assyrians, Babylonians, Medes and Persians, Greece, Rome, The Huns, The Turks, The Nazis and the Communists and scores of others have sought for world domination.

This is nothing new and we should expect it from fallen humanity.

But closer to home – in our private lives – we love to connect the dots to give us a discernable pattern in all sorts of circumstances, as a way of dealing with the unknown.

Especially in regard to things we are offended by.

We very quickly imagine a failure to shake hands, a missed thank you note, an unacknowledged phone call, or a passing glance of the eye to be filled with all sorts of sin and menace. Shame on us.

As our text notes: Lions, roosters, he goats and king’s with their armies with them: All STRUT.

But the similarities stop there.

None of the 4 mentioned they strut for the same reasons.

Yet how quick we are to assume reasons behind the actions of others, with nary a moment’s trouble at finding out the truth by means of asking a simple question or two.

By that I really mean asking – not accusing BY asking. Which is a great temptation in itself, isn’t it?

How many relationships would be spared if people would only assume the law of love:

Love assumes no sin in the other person, unless the facts prove it to be otherwise.

People’s sin can be counted upon to make them brag and leak information at enormous rates.

But we have this compulsion that we MUST have THE reason behind anything we cannot fathom normally.

As though everything is a matter of direct cause and effect.

Why are fire engines red?

Because they’ve got 8 wheels and 4 people on them

And what is the reasoning behind that?

There are 12 inches in a foot

The lion struts. The rooster struts. The he-goat struts. A king appearing with his army struts.

Not a one of them is connected to the other.

They are, but – similarities.

Different God – NOT the Triune God of the Bible

But the ancient Christians told those men the truth,—namely, that “as they had feigned unto themselves an imaginary Christ, so they should have an imaginary salvation only.” – John Owen

Similarities are not truth simply because we can observe those similarities.

Better to occupy our hearts and minds with The Divine conspiracy of the Triune God to bring saving grace to a lost race.

The Heavenly Father conspiring to bless His Son with a Bride fit for Him.

A Son who redeems that Bride when she ran away in rebellion – buying her back at the price of His own blood – dying in her place for her crimes committed while in her rebellion.

And the Holy Spirit conspiring to make her clean and holy and prepared for the Son once again.

THAT’s worth musing on.

It is a law of nature

It is the simple truth

Harp on, or harbor anger – and you’ll produce strife

Sow to the flesh, you’ll reap in the flesh

If we are arrogant, we WILL be brought low by the hand of the Lord who “opposes the proud, but gives grace to the humble” – 1 Peter 5:5

This is why we need the Gospel so desperately – “The wages of sin is death” Death is the unavoidable consequence of sin.

It is a universal, inevitable and unavoidable.

No one can sin with impunity. No one. Under any circumstances.

And just because you haven’t experienced the wretched results yet for some of your sins – do not imagine they have gone unnoticed.

You’ve walked your own way in life.

Ignored the Gospel in its free offer, and in its command – ACTS 17.

And you say to yourself, “the sky didn’t fall in, the earth didn’t stop turning on its axis, the universe didn’t unravel.” WAIT!

1 Timothy 5:24 (ESV) The sins of some people are conspicuous, going before them to judgment, but the sins of others appear later.

There is an inevitable result of believing the Gospel and putting your faith in the substitutionary atonement of Jesus Christ on the Cross – dying for human sin so that those who believe might go free!

And there is an inevitable and unavoidable result of rejecting this Gospel of grace – and it is eternal punishment away from the presence of the Lord.

It is to this reality we call you today.

Here is Christ – God’s Son, crucified for guilty sinners – for you and me.

for all have sinned and fall short of the glory of God, 24 and are justified by his grace as a gift, through the redemption that is in Christ Jesus, 25 whom God put forward as a propitiation by his blood, to be received by faith.[1]

There is no other hope.