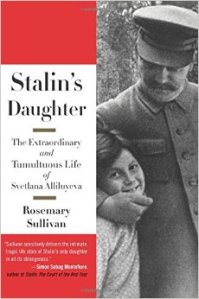 Vacation is a special time for me. I hunker down to read things I would not have the time for given my ordinary time constraints. And this vacation in particular found me reading (I should say devouring) two very different but powerful and enjoyable books. Both a bit lengthy, and both wonderfully rewarding. I wish to recommend them both, and whet your appetite for either just a tad.

Though I was reading them simultaneously (along with snatches of 4 or 5 others) I began and ended first with the very recently released “Stalin’s Daughter: The Extraordinary and Tumultuous Life of Svetlana Alliluyeva” – artfully and captivatingly penned by Rosemary Sullivan.

As you might imagine, tracking down details and personages both in the former Soviet Union and in a number of other places around the globe was a monumental task. Collating that material in a narrative form that neither misses anything crucial nor allows itself to be bogged down in unnecessary detail must have been staggering. Staggering just to contemplate, let alone actually accomplish. Sullivan does it with a keen and insightful eye, sympathy without gloss and accuracy without judgmentalism nor cruelty. It is “reporting” of the first order. I could not put it down.

I grew to have a strong attraction to this wounded, but mostly undaunted and rare creature Svetlana. I wish so much that I could have known her. And that, in the full light that in her brokenness, she could often alienate those who delighted in her most. Not out of a native cruelty to others as much (at least as it seems to me) as a certain lack of emotional filters never allowed to be cultivated in her odd environment and collection of extreme circumstances.

The human soul craves. Just as we are born physically hungry, so our souls enter this world hungry. We are, I think, most hungry for 3 things: Affection, Affirmation and Accomplishment. When any or all of these are withheld, or meted out in spasmodic dribbles, they grow to overlap one another and become nearly indistinguishable. If imbalanced, we can unconsciously let them disproportionately take the place of each other – trying to fill the void. But because they are in fact discreet, they can move into each other’s room, but never actually occupy or fulfill the missing one(s).

In the beginning, the myopia of youth assumes the presence of these even if they are only there in shadow. As time removes the masks to expose the truth, the disillusionment can be so unsettling as to be almost impossible to recover from. Such is Svetlana’s story.

Brilliant, but daughter to a cold and distant idealog of a mother – who took her own life when Svetlana was but a little girl (a fact she never learns until she is 19 years of age), and an evil genius of a monstrous father who bears the responsibility for the deaths of 50 million souls (by some estimates) – that Svetlana survived or functioned at all is nearly beyond belief. But there she stood – the impossible by-product of this perverse union. And a testament to the wonder of what creatures made in the image of God can endure – even when He is denied and railed against. It makes you gasp.

Through her oh so many and painful relationships. Living in the artificial bubble of Soviet Socialist elite at its most ruthless and powerful. Coming to grips with total unpreparedness to live outside of that bubble when at last escaping to the West. Naïve in the most interesting ways, and yet equally wise in others. This force of humanity called Svetlana was shaped so profoundly by the fitful spurts and drops of affection, that she sought to fill that void over and over by any means she could. In time, she would accomplish much by her writing, and win the affirmation of many (whilst being excoriated by countless others), but those cannot replace true affection no matter what one does. And when you’ve been virtually starved for  true loving affection – and when it has been used as a weapon or a means of control for so long – one wonders if you lose the capacity to ever take it in and feed upon rightly at all.

All I know is, I kept wishing that someone, anyone would take this little girl and scoop her up in their arms and show her simple, unqualified love and affection. I wished it time after time. Scene after scene. Decade after decade. And it seemed none but her own daughter ever really came close. But she needed it from someone other than her daughter as well. And I wept inwardly that it was never so.

That does not mean I left the book pitying her. I do not think that was Sullivan’s point at any time in her writing the book either. Indeed, I came away admiring her time after time. I just wanted more for her. Better for her. For she was throughout her life and in the end, a truly extraordinary human being. Both tragic and triumphant. But one whom I saw as having appendages of her soul that like undeveloped limbs never were allowed to function as fully as they ought. For all that, those were also part of what made her the amazing individual she was.

In the end, I think that is what Svetlana really wanted – to simply be her own person. To not have her individuality eclipsed by being Stalin’s Daughter. The Kremlin’s little girl. The United States’ prize defector. A mark for other’s plans and schemes to be played off of for their own purposes. Just to be. But it was not to be so.

Rosemary Sullivan is to be congratulated above all – for trying to make that a reality for Svetlana though it be posthumously.

This is a towering work of research and testament to one of the most enigmatic and powerful figures of our time.

Thank you Rosemary Sullivan – for bringing Svetlana Alliluyeva into my life.