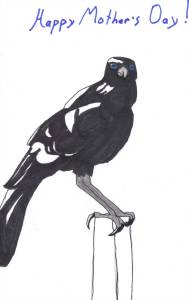 With Apologies to Edgar Allen Poe and his Raven

Once upon a midnight dreary, Mother dear, both weak and weary

Paced while waiting on the hospital floor

When pains of childbirth finally caught her, she brought forth her first born daughter

And smiling at this face she now adored

In maternity’s love fueled haze thought to herself

I think we’ll have one more.

Thus in an August later, after, a son was born with love and laughter

Now the tribe once three had become four

And how she loved their family unit, the perfect four, none could impugn it

And yet a longing nagged her at her core

The joyous haze once more descended induced again the thought:

I think we’ll have one more.

Adding to the tribe with just one more

Another son! I came so speedy, so what my eyes were small and beady?

Wouldn’t I be welcomed at the door?

It took no time to set a tone eliciting the plaintiff cry to come:

My goodness Ray, what have we done? In birthing this, this – other son?

All knew that she was rattled to the core

An obstreperous, weird little creep, their sole relief – when I would sleep

She sought the face of God and did implore

Forgive my past ill-thought conception and the haste-filled prayers –

I never should have thought it: Just one more

As time would pass, tho nearly feral, and courting daily new-found peril

Straining all her patience, and then more

She weathered each new strange condition, embarrassing and odd position

Yes, still my mother loved this one she bore

A decade plus was then well spent, in pondering how to repent

Two normal kids, and then there’s me, ‘tis truly all a mystery

What sins could she be suff’ring all this for?

And shocking all with news: Ah, just one more

And so in time, there came another, tho I swear from another mother

Like Seth to stand in place of Abel’s store

A tweaky, twerpy little child, but with a countenance so mild

Can anything be more a total bore?

I rue the day my Mother said: One more.

But such is grace, and a mother’s love, it MUST come down from God above

To guide and pray and nurture our small four

And never, ever losing hope, though number three was a colossal dope

She sought the Lord through many trials sore

Oh thank you! I promise! And you can quote me: Never more!