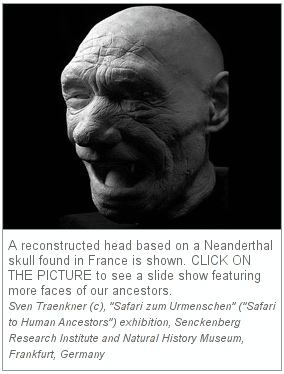 Its in today’s on-line issue of Discovery News. The caption next to this picture reads: “Homo neanderthalensis.”

“The “Old Man of La Chapelle” was recreated from the skull and jaw of a Homo neanderthalensis male found near La Chapelle-aux-Saints, in France in 1908. He lived 56,000 years ago.
His relatively old age, thought to be between 40 to 50 years old, indicates he was well looked after by a clan.
The old man’s skeleton indicates he suffered from a number of afflictions, including arthritis, and had numerous broken bones.
Scientists at first did not realize the age and afflicted state of this specimen when he was first discovered. This led them to incorrectly theorize that male Neanderthals were hunched over when they walked.”
Then I saw this –