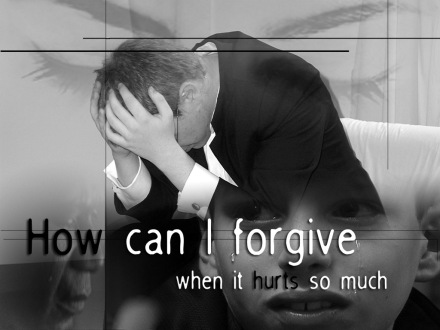 1 John 2:12 (ESV) I am writing to you, little children, because your sins are forgiven for his name’s sake.

Forgiveness is a constant and pervasive theme in the Bible. Apart from God’s forgiveness of our sins, we cannot be reconciled to Him. His provision of forgiveness, the means whereby He CAN forgive us, without also violating His own holiness and justice, is the mystery of the cross. God remains fully just and justice is done – even in His forgiveness, because the penalty has been paid. Justice and mercy meet in Jesus. He dies in our place (meeting justice) and thus the Father freely forgives without contradicting His own nature. What a wonder to behold. I confess it stuns me afresh every time I consider it. What a God, who loved us so – that He would create such a plan to redeem us – and at what a cost!

That last statement of course is something we must consider regularly too. Forgiveness is costly. Many a person doesn’t want to forgive, until it seems as though it isn’t costly anymore. They want to wait until the sting of the offense is gone. Until it isn’t painful to forgive. Of course, if the Father had done that in our case – none of us would be saved. The Father had to be willing to let His Son endure the pain on our behalf, and the Son had to be willing to endure it Himself. Forgiveness is expensive. And what it costs to redeem a human soul is beyond the realm of our ability to see completely – except that it is never less than the death of the eternal Son of God.

Now we often talk about forgiveness being for the benefit of the sinner. For our sakes, Jesus died – so that we might become His and be reclaimed from the bondage and penalty of sin. And, sometimes we talk of forgiveness in terms of the one offended. Haven’t we all been exhorted (and rightly so) that to fail to forgive is destructive to one who refuses. Bitterness ensues and an even greater harm (than the original offense) comes in the wake of unforgiveness.

But our text considers a third aspect of forgiveness – that God has forgiven us for the sake of Jesus’ name. And if you are struggling with forgiveness toward someone today – I would like you to consider this for just a moment. Perhaps the argument that unforgiveness is harmful to you isn’t persuasive. Perhaps the argument that the offending person NEEDS forgiveness isn’t compelling either. But if those two have failed – then consider this: Beloved, we need to forgive for HIS name’s sake. In other words – that the world might see the extravagant, unsearchable, amazing wonder of His mercy and grace displayed through our willingness to bear the cost – that others might know what His forgiveness is like. Do it for Him. Forgive so that others might see Him displayed. For His name’s sake, forgive. Make Him known.