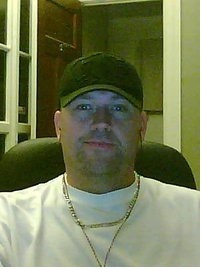 At 11:10 last evening, we had the sweetest privilege, as my wife and me, my brother Ken and his wife Ruth, their daughters Elizabeth and Rebecca and their son Brad – witnessed their other son – 36 year old Barrett Leighton Ferguson step into the arms of Jesus.

We were listening to his favorite hymn at the time – “It is Well With My Soul”. As the song moved into the words: “My sin, O the bliss, of this glorious thought; My sin, not in part but the whole – was nailed to His cross and I bear it no more…” – Barrett stopped breathing and left us to enter fully into that “bliss”.

“Bear” as everyone called him, was one of the world’s truly gentle souls. As big and as strong as a bear, he had a deep, sweet tenderness that you could not miss if you met him for more than five minutes.

Physically, stomach cancer claimed his body. In reality, his Lord and Savior claimed His prize – the soul of the man He died to redeem on the cross of Calvary.

Barrett knew his Savior Jesus Christ, knew he was going home and from the first attempt at futile surgery to reverse his condition declared that whether or not he recovered from the cancer – whether he lived or died: “I win”. He won last night. Won his eternal reward by the grace of the One who loved him and died for him upon the cross two millennia ago to pay the price for your sins, mine, and Barrett’s.

Barrett fought his cancer – but won more than the whole world could ever give by trusting in the grace of God in Jesus Christ.

I leave you these words in his honor –

The Gentle Giant sleeps at last

And there, he bows, before the Throne

Of Christ he loved so dear

And marvels at the angels’ songs

He’s yearned so long to hear

In waves of glorious rapture’s swells

He weeps and sings and worships there

The vision of His God unveiled

The Holiness of God now seen

The mind filled more than ever dreamed

Transcending all he’d loved and spoke

His all – His Christ is there!

No shadows found in any room

He flies from each new wonder, then

To more beyond compare

Is all his lips can say

As each unfolding moment brings

Him more of Heaven’s Day

In this his soul is now employed

Till all who fell asleep in Him

Shall rise to die no more

The Gentle Giant sleeps till then

His battles fought and won

In sweet repose upon the breast

Of Christ, the Blessed Son