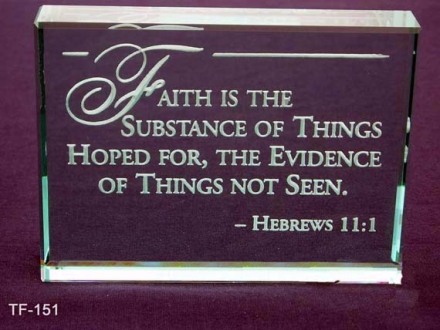 Hebrews 11:1 (ESV) Now faith is the assurance of things hoped for, the conviction of things not seen.

There are two parts to this very familiar verse. The first part having more to do with the one having faith – it is internal if you will. The other, has to do with the witness of faith – its external component. Let’s look at the first.

Faith is the “assurance” of things hoped for: This is for the Believer. When I am believing God, trusting in His person and promises, I have true assurance.

The “evidence” of things not seen: This is for the Unbeliever. That Believers DO have faith, is the evidence of the unseen work of God in their hearts, and of the reality of the the things they testify to, and to the reality of God’s being.

Faith is – in the Believer – that ground or assurance we have that the things which God has promised, are true and actual. The word assurance comes from a root which has a picture of something underneath, holding something else up or being its foundation. As those who are in Christ, faith in us gives us an assurance.

But note that our assurance is not a naked or abstract assurance. It isn’t that Christians are just confident people, as

though being born again makes us cocky or self-confident. It is not an attitude as much as it is a persuasion. An inward grip on truths that others do not and cannot use to understand reality. When some scientists began to think in terms of germs, microscopic organisms which were behind the spread of diseases and such – others, who could not conceive of such things, could not function within a paradigm of medical treatment that worked as though these little critters actually existed and had to be dealt with.

This is how the unregenerate feel when we talk about spiritual realities. To us, they have been discovered to our souls. We see them. So the the way we think and the things we do reflect this understanding. To them, our actions, opinions and reactions can be undecipherable. It is as though we are a cluster of seeing people in a world of blind men. Our descriptions of what we see can only be grasped in the most rudimentary way by those still unable to actually see color and shapes. Even though they can trade on the language and catch some of the concepts.

It is this dynamic which is alluded to by the Apostle Paul when he says that: “The spiritual person judges all things, but is himself to be judged by no one.” (1 Cor. 2.15) Those who have not been born again, simply cannot conceive (in terms of grasping as real fact) precisely who and what we are and how or why it is we think and are the way we are. At the same time, because we can see these things, we can and do make judgments and assessments about things that make perfect sense to us. The sun has risen on our horizon in a way which sheds light on everything.

I say all this by way of reminder in terms of how it is we interact with unbelievers in the communication of the Gospel. Bear in mind the natural limits imposed upon the fallen heart and mind. Once, these things made little sense to you too. Think of the task then of translating for them. Of speaking to them in ways which seeks to bridge the gap not expand it.

Christ Himself is the bridge between us, and His own transcendence. He stoops to us. Condescends to our level. He takes upon Himself the form of sinful flesh. No, He does not become sinful, but comes to us neither like Adam in his pre-fallen glory, nor in His own unveiled and intrinsic glory. He comes looking, talking, and functioning like any other son of Adam’s race. So that He might take the self-revelation of the Father – and bring it to us. (John 17.8) So must we. In patience He explains His words to those who ask. He labors the central truths over and over – awaiting the Spirit’s work of illumination. Teaching, opening, explicating, announcing, warning and repeating.

This is a Biblical paradigm for Gospel evangelism.

2 thoughts on “The thing about faith is…”