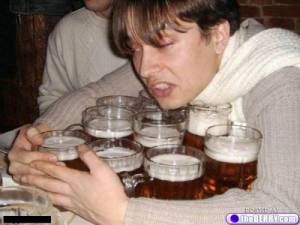 Revelation 17:1–5 (ESV) — 1 Then one of the seven angels who had the seven bowls came and said to me, “Come, I will show you the judgment of the great prostitute who is seated on many waters, 2 with whom the kings of the earth have committed sexual immorality, and with the wine of whose sexual immorality the dwellers on earth have become drunk.” 3 And he carried me away in the Spirit into a wilderness, and I saw a woman sitting on a scarlet beast that was full of blasphemous names, and it had seven heads and ten horns. 4 The woman was arrayed in purple and scarlet, and adorned with gold and jewels and pearls, holding in her hand a golden cup full of abominations and the impurities of her sexual immorality. 5 And on her forehead was written a name of mystery: “Babylon the great, mother of prostitutes and of earth’s abominations.”

In the closing chapters of John’s visions and the final decimation of this World’s systems in God’s just judgment, the following insight is offered up to us:  “Come, I will show you the judgment of the great prostitute who is seated on many waters, with whom the kings of the earth have committed sexual immorality, and with the wine of whose sexual immorality the dwellers on earth have become drunk.”

It is hard to conceive of a more apt description both of the society in which we live today, and the great issue which confronts us. Here is something we need to face with extreme clarity: 1. Sexual immorality is an intoxicant. 2. It is the chief intoxicant with which both those in power, and the general populace have “become drunk.” The Bible doesn’t mince words.

The pervasive problem of our society is its utter preoccupation with sexual immorality. It may well be the defining issue of our age and culture. No one would argue that it is not to be found everywhere, and that both men and women are increasingly degrading themselves both publicly and privately in the throes of it.

“Addiction” is word with much freight due to its use in the mental health professions of the day. But it is also an apt word when understood properly and in this context. 1 Timothy 3:8 reminds us that those in Church leadership (there, Elders and Deacons) are not to be “addicted to much wine” (ESV). The word for addicted there being a word used 24 times in the New Testament to communicate the idea of being focused upon, concerned about and occupied with. It most often is translated “beware”, “pay attention to yourselves”, “watch”, “be careful.” It evokes the image of something always claiming our thoughtful attention. Something of such importance that it needs to occupy a place in our normal consciousness. And when applied here, how insightfully descriptive. We are a people preoccupied with, always on the lookout for, paying close attention to – sexual immorality – either in our own lives, or vicariously in the lives of others.

Now intoxicants all have the same basic properties – and being drunk on sexual immorality shares these same features.

1. Indulgence in it dulls the senses. It robs one of the ability to think and reason clearly. It temporarily dulls pain (which is often why it is so attractive – especially to those suffering inner turmoil and pain). But in the process, it also dull happiness – for it is a mock happiness, brought on by a mere chemical effect and not on any true change in the inward state.

2. It skews the perceptions. Reality is blurred. It prevents one from perceiving either negative or positive things properly, and prevents clear reflection upon truth in any form. It makes you prey to lies from others along with the propensity to believe the lies you tell yourself. This may seem at first to make bad things less ominous, but it also makes good things less fulfilling. It will justify unreasonable actions and opinions, while dulling the conscience as it calls to right action. Like the volume control on a radio – you cannot use it to lower the volume on just one station. When you use it, it lowers the volume on every station at the same time.

3. It casts off inhibitions. The God-given lines that we know we ought not to cross, suddenly disappear. Anything becomes possible. Nothing is truly taboo. It robs us of the ability to sense rightful shame over truly shameful things. It gives us permission to sin without blushing.

4. It allows anger to flow unfettered, and turns true love into meaningless sentimentality. Outlandish statements will spew forth. Control over the emotions will dissipate and passions will gain the ascendency – no matter what the aftermath – because emotions seldom allow us to see beyond them. They take up our whole field of vision.

All these, and many more are the results of intoxication. And we are no less intoxicated by sexual immorality than we are by any physical substance known to man.

Like with wine, the Bible does not prohibit proper enjoyment of sexuality. Within its proper bounds, its benefits are many and varied. It is a gift from God. Outside of its proper bounds, it is as destructive as poison. Sexuality is a blessed part of life. But if it is something you pay a lot of attention to, if it calls for your constant attention, if you are always on the watch for it as a stimulant – you are addicted. Married or single, if you cannot stay away, and if it clamors for your attention inwardly – so that you seek out glimpses and titillations here and there to get a “buzz,” you are addicted.  And it is serving not as a true blessing, but as an intoxicant. If you are single and think that when you get married, that will go away – because you are marrying the “brewery” – you will still be enslaved. And your marriage will suffer the results.

What then is the answer? There is but one. Something higher must take the place of our preoccupation. Something more wonderful. Something of greater beauty, higher benefit, sweeter joy, more complete satisfaction and more lasting fulfillment. Not something merely to dull the “pain” of our fallenness, but what contains the hope of our eternal future. Training the heart and the mind to find our deepest happiness and satisfaction in Jesus Christ. To give ourselves over to searching Him out as out highest pleasure, until He displaces every other joy as a mere triffle. When tempted to “take a drink” – to seek Him in prayer that moment by the Spirit, to be the answer to what our inner man is yearning for. And to continue that course in faith believing that He will answer that pursuit with an ever increasing revelation of His good ness to our soul. To find our all – in Him.