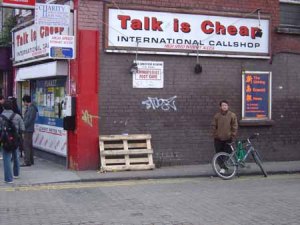 Proverbs 14:8 The wisdom of the prudent is to discern his way, but the folly of fools is deceiving.

The wise man is forever asking the question: Where will this take me? The fool doesn’t ask, because he doesn’t want to know. He wants to deceive himself into justifying falling into sin. But this is also the very place where the Christian finds great rejoicing. The Puritan Richard Baxter once said: “Once you have a God, a Christ, a heaven to rejoice in, you may rationally indulge a constant joy.” The wisdom of the prudent is to discern his way, and if that way is following Christ; if that way is the road to Heaven through the Gospel; if that way will result in being in the unveiled presence of our glorious Christ and Savior – our Savior and Lord, for ever – it is time to begin to rejoice with joy unspeakable and full of glory! The only right word is – hallelujah!

Proverbs 14:9 Fools mock at the guilt offering, but the upright enjoy acceptance.

Every young person knows the sting of being thought of as silly, for paying attention to spiritual truths. So be it. Better to be accepted by God, than by millions of adoring fans. Let others mock at the “guilt offering”. They will mock us for feeling guilt at all, or for thinking that the sacrifice of Christ can remove that guilt. Either way – the Scripture says they are the fools. Let fools say what they will about your dependence upon Christ’s blood to meet your need in satisfying God for your guilt, you have The Father’s full acceptance. Their rejection is worth it. Better to have His acceptance than theirs. And if you are accepted in the Beloved – you are accepted indeed.

Throw off God’s yoke, and you will be full all right – full of filth and grime and all manner of sin and its effects.

Yield to His yoke, and in due time, an entire harvest of good things will be yours in the Spirit. Sin always begins with the neglect of what is ours in Christ, shrinking back (backsliding) from those holy habits that bring us repeatedly into His presence and into contact with the Gospel truths that transform our lives by the power of the Spirit. The heart desires to be filled. This is as we were designed. But what we pursue to fill it, makes the difference between Heaven and Hell.

Proverbs 14:15 The simple believes everything, but the prudent gives thought to his steps.

What do you believe, and why? These are questions that the Foolish never seem to put together. Many a man knows his “opinions.” He is acquainted with at least some of what he believes. But does he examine the reasons behind why he believes them to be true? The Wise are always about this business. They know that ideas have consequences. They examine and re-examine their own thoughts and views and take them back to the Word of God over and over for refinement and scrutiny. Even the Christian who never questions what he believes and why proves to be “simple.” And that is not a complimentary term. It comes from a word which implies someone who will believe anything – in other words – gullible. Christians are not to be gullible but discerning. Contrary to the World’s definition of faith – we don’t just “believe” as though believing anything makes it true or useful. Faith is the reasoned response of the one whose eyes have been opened to know that God has spoken to us in His Word and in His Son, and believing what God has said is true, orders their life accordingly. Be a thinking man or woman of God.

Proverbs 14:23 In all toil there is profit, but mere talk tends only to poverty.

Here is the bankruptcy of mere “talk therapy”. One needs to act, not talk only. One needs even less to endlessly rehearse their woes in the ears of others. If you are not doing something about your problems, but merely discussing them with your friends and complaining – do not expect any progress. DO something if you can. Otherwise, you do nothing else but aggravate your own soul, and drag others into it. You will foster doubt, unbelief and bitterness in your own heart, and run the risk of infecting others with the same. Even prayer by itself is only talk, where action is called for. We must never do less than pray, but often must do much more. One needs not to just pray for a job, they need to go look for work. Don’t just pray that your marriage improve, learn to love and bless your spouse. Don’t get together and talk with others or even just pray about your Church, dig in and help build up others in Christ.

In every conquest of Canaan in the Old Testament, though God had promised the land to His people and told them He would fight for them and drive out the inhabitants, they STILL needed to raise the sword and actually go into battle.

So it is with our sins too. We cannot just pray them away – we must take all Scripture informed means to prosecute a war against them and prevent them from holding sway over us. This, by the power of the Spirit, believing that He will give us the victory if we will pursue in obedience to His Word, will see us bring them one by one under His hand. Fight on Christ. Do not do less than pray – pray always. But don’t stop there – fight! God has promised victory to those who cross over and pursue.