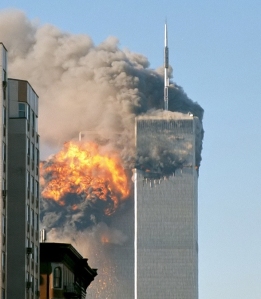 On this anniversary of the terrorist’s attack on the US in the destruction of the World Trade Center Towers in NYC – I thought it might be appropriate to look back at what I had written that day.

I had just left a local Christian High School, after teaching a class on the doctrine of radical human depravity due to the Fall. I could never have guessed we would witness a living example in such stunning ghastliness only minutes later.

Here is what I penned in that hour immediately after.

From: 2 Corinthians 5:20  Therefore, we are ambassadors for Christ, as though God were making an appeal through us; we beg you on behalf of Christ, be reconciled to God.

As I sit to write these words today, my ear remains tuned to the awful news billowing out of the media outlets like the clouds of smoke that mushroom up from the scenes of terror which have gripped our country. The phone rings continually, and people everywhere in the numb of fresh shock, stagger at the specter of the World Trade Center Towers in New York City, the Pentagon, and rural Western Pennsylvania – where commercial airliners were turned into weapons of war. Hundreds for certain, and possibly thousands, of unsuspecting people were ushered violently, suddenly, horribly and without warning into the presence of the living God. Tens of thousands will mourn. And for even more than that – life will never be the same. And the weight of the collective shock, confusion and sadness grows beyond anything most of us have ever experienced in our lifetime – and possibly ever will. For many, all that can be done is to groan before our God.

The aftermath of the coming days will no doubt be dark and heavy. The black work of sifting through the buildings and the wreckage will take its toll on everyone involved. And their families. Firsthand survivors will be plagued with guilt over having been spared what their neighbor(s) succumbed to. Rescue workers will have nightmares of what they see and hear – and imagine. Even the millions who are mere onlookers will suffer long lasting and deep effects. Pundits will rise in the media, the political arena and in our pulpits to explain it all. O how I wish I could. Fingers will be pointed toward ethnic groups, religion, philosophy, technology, politicos, mass conspiracies and possibly even aliens. Our need to make sense of it all will drive us to find some scapegoat – any scapegoat – any explanation. As long as we can point with confidence at some one or some thing and say “that’s why” we’ll feel better. Whether we are right or not will be irrelevant. The sin nature requires it. We’ll need someone to vent our anger on. Somebody to hate so that it is all justified. Some way of alleviating our fear. Some means of quelling the aching, gnawing doubts about how it could happen to a “Christian Nation”, or at least to some Christian people –  and that, on our own shores.

Some preachers will stand tell us that this is God’s judgment upon us. As though they really know. Others will simply enter the sacred desk and tell us it will all be fine. The homiletical equivalent of kissing a child’s boo-boo. Some will admonish us that we just need to learn to love each other better. Still others, void of counsel, and too honest to lie or guess will just weep.

There will be the instant erection of organizations and “ministries” all built around the new cause. The answer (we will be told) is to be found in a new prayer technique; So-in-So’s book; Anti-Terrorism Bible Retreats; Love-everybody Seminars; Counter-Terrorism Christianity; “Jesus Was Not A Middle-Eastern Jew” bracelets and Guerilla Bible Studies. The sale of new prophecy charts and tapes will set all time records.

And very little will be said about the fact that on the 11th day of September, 2001, on Manhattan Island in New York City New York – several hundred if not several thousand men, women and possibly children were instantaneously translated into the presence of the Living God. One cannot help but wonder – of that number – how many did so having previously been reconciled to their Holy Creator by the shed blood of Jesus Christ? How many of them entered their eternal reward; and how many stood before the Just Judge of all, whose wrath is yet to come?

Where do you stand right now?