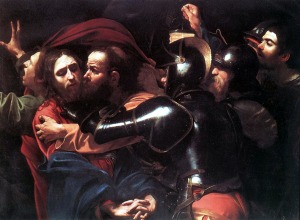 Because of the season, and the circumstances surrounding his death – no burial service to speak of had been arranged.

Right after he was found, a few of us found a plot of ground – more than 6’ feet away from any other graves (according to the custom for suicides) – and buried him.

We all questioned. A thousand things.

Some things would become clearer in time.

But by no means all.

Now, it was two months later.

So much had happened in the meantime.

Jesus had appeared to us over and over.

At first, we couldn’t believe it.

And not just us. There are hundreds more that have seen Him.

Everything was – IS –  so different now.

Each of us had begun to make plans for what to do next.

Some, for where to go next.

Though in truth, until the persecution began to ratchet up a little while later, we barely thought of anything other than just staying in Jerusalem.

Thaddaeus was the first to say anything.

He said it just wasn’t right for us to forget him.

Yes, we knew all about the betrayal now.

Yes, he was always a mercurial – an up and down kind of guy.

But wasn’t his passion part of what we loved about him?

Didn’t we love him?

Of course we did!

He was one of us from the beginning.

Something needed to be done.

Something needed to be said.

Yes, Matthias was one of us now – but Judas, Judas had been here all along – from the start.

We couldn’t just act like he hadn’t been there at all.

We couldn’t just forget him.

And it got silent for a very long time.

We all looked at him.

“We can’t just brush his memory under the carpet.”

“Give me a day or two, then let’s go to the grave and remember him.”

What to do next?

Get the word out to those who had been with us so much?

Sure, some would scoff and refuse to come.

Others might just grimace at the thought of his name let alone agree to come.

Some, no doubt would think us foolish or even blasphemous.

But we’d let everyone know we could.

And how they responded would be between them and their hearts and the Lord.

But in two days, we would gather.

The day itself was unremarkable.

And a goodly number did show up.

Some were clearly conflicted.

It became uncommonly and uneasily – quiet.

Then Peter stepped out and stood opposite us.

“I want to thank you all for coming, regardless of precisely why.”

“But as we – the 12, thought about it, we just couldn’t let Judas’ death go without reflecting on it. And doing something about it.”

Without exception, everyone wondered what he would say.

What COULD he say?

I don’t think any of us were really breathing.

“I want to say first of all, that this man, Judas, was my friend” – Peter began.

“I loved him like a brother – more than a brother – a fellow apostle of the Lord Jesus Christ.”

At this, Peter broke, and began to sob.

The tears flowed freely and copiously down his face.

“Tradition calls us to eulogize the dead” he began.

“And I can truly do that today.”

“But let no one confuse my eulogy as exoneration.”

“And each of you knows full well why not.”

“But this man, Judas, born in Kerioth, was someone I knew for years.”

“I walked with him – lived with him, virtually unbroken for almost 3 years.”

“Once, I would have told you that I knew him as well as I knew myself.”

“Now, it seems none of us really knew him.”

“Except that in him, we come to see the true depths of the sin that infects the souls of each one of us.”

“There was nothing special about him that singled him out from the rest of us in terms of being any more wicked or sinful.”

“In fact, if there was anyone we all trusted, it was Judas!”

“If there was anyone we never suspected, it was Judas – at least no more than we suspected ourselves.”

“How well I remember those nights around the fire when we tried to fathom the things Jesus was saying and doing in front of us day by day.”

“Those long nights – stretching out into the early morning hours, speculating about who He really was – and what that really meant.”

“I loved his sense of humor.”

“He had the most uncanny way of putting others at ease – instantly.”

“You couldn’t help but like him – and trust him.”

“He was the most natural choice to be our treasurer.”

“He gave off this air of being solid and caring.”

“Sure, he had his opinions and his sharp edges – but nothing more than the rest of us.”

“When he was aghast at the extravagance of Mary’s anointing – he only said what the rest of us were thinking.”

“And when Jesus sent us out two by two – Phillip will tell you – he preached with conviction and clarity.”

“And the miracles! He wasn’t any less blessed to be the source of healing on that trip than any of the rest of us.”

“Again, when the seventy two got sent out – he was such a mentor to the new ones, drawing on his previous experience.”

“If you had asked me then who Judas was, I would have told you that he was the most trusted and trustworthy of all of us 12.”

“That he was a bosom friend of the most profound kind.”

“That not a one of us would ever have dreamed he would betray Jesus, and be the means of His crucifixion.”

“Sometimes, I still can’t believe it.”

And at this, Peter broke once more, just hung his head and – sobbed.

We wept with him.

“Perhaps the thing which perplexes me most, is why Judas, and not me?”

“Listen to me carefully friends.”

Just as Jesus said I would – that very night, I denied I knew Him three times!”

“Oh how my heart aches to think about it once again.”

“Yes, Judas denied Jesus by selling Him out to the Chief Priests for the 30 pieces of silver.”

“Yes, he denied Him once again by kissing Jesus in the Garden.”

“But the worst denial of all was in the act of hanging himself!”

“In that denial, the most important denial, he denied that there was forgiveness of sins in the blood of Jesus.”

“This, is the denial that damns.”

“It was a form of earthly, worldly repentance. But not a godly sorrow.”

“He tried to atone for his own sin in killing himself.”

“But there is no human way to expunge sin – even at the cost of one’s own life.”

“Jesus Himself told us that it was He who had authority on earth to forgive sins.”

“We can’t do it – for ourselves or for others.”

“Only God’s mercy extended to us in the Gospel – through the blood of Jesus as our substitute can suffice.”

“Nothing other.” Nothing else.”

“This is the Gospel we preach everywhere we go.”

“Christ died for our sins!”

“This is our only hope.”

“This is what He told us to tell to the nations.”

“We must trust His atoning death on our behalf and that alone.”

“And when it is all said and done – this is what Judas didn’t believe.”

“Why am I here today talking to you all while Judas lays dead?”

“Why are my three denials not the means of damning me, as his denials have damned him?”

“For some reasons hidden deep in the heart and mind of God alone – He had mercy upon me, and wrought in my soul a saving faith which my friend Judas never received.”

“I will not lie to you nor try to explain the inexplicable.”

“I was no more deserving in any way, and Judas no less.”

“We were both born to the same Jewish heritage.”

“We were both taught in the Synagogues.”

“We were both called by Jesus to follow Him.”

“We both preached and taught and healed at Jesus’ behest.”

“We both saw Him raise the dead.”

“We both saw Him feed the five thousand from just a few loaves and fishes.”

We were both in the boat when Jesus calmed the sea, and we were both there when He called Lazarus out of the grave.”

“We both walked with Jesus and heard Him and watched Him for these three years.”

“We both hoped for a better day because He had come.”

“This is not an issue of lack of any proof.”

“And we all heard Him give us the Gospel of the Kingdom more times than we can count.”

“Like Noah in his day, I can only say that I found grace in the eyes of the Lord.”

“Grace that our Lord has commissioned us to preach to you today – even to every living creature.”

“Grace that calls you to come to Him and believe upon Him and be saved from your sins.”

“Grace that uses this very occasion to see in no uncertain – and in the most graphic and tragic of terms – the end of those who reject this Jesus as God incarnate and the only hope of salvation.”

“The end of those who deny Him, but never run to Him for His forgiveness.”

“The end of those who think to deal with their own sin their own way and not depend upon His mercy and grace alone.”

“The end of those who deny Him His right to rule and reign in their hearts and lives.”

“I stand here before you today every bit the denier of Jesus that Judas was.”

“And I stand here forgiven.”

“And a preacher of the Gospel of Jesus Christ to each one of you at this critical moment in your lives.”

“But Christ is risen!”

“Judas and I both denied Him.”

“But Christ’s supreme sacrifice is greater than all our sin.”

“In the words of Isaiah the Prophet: “Turn to me and be saved, all the ends of the earth! For I am God, and there is no other.”’”

“All of your denials: denying Him His right to rule;

denying His singular power to forgive sins and save;

denying His deity and atoning sacrifice – He can and will forgive them all!”

“Judas refused all this. And died his death in his sins.”

“I stand before you as proof that Jesus Christ can save the worst of deniers.”

“And I plead with you to come to Him today – and believe.”

With that, Peter prayed.

Oh what a prayer!

A prayer of thanksgiving for God’s grace.

A prayer of intercession for those who were among us who still didn’t believe.

A prayer filled with tears.

A prayer of comfort for Judas’ family and friends.

A prayer, in the name of the blessed Son of God – Jesus the Christ – who alone can forgive sins, because of His atoning sacrifice on the cross at Calvary.

One thought on “A Eulogy for Judas”