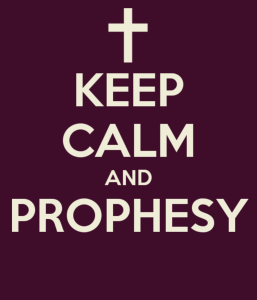 1 Chronicles 25:3 (ESV) — 3 Of Jeduthun, the sons of Jeduthun: Gedaliah, Zeri, Jeshaiah, Shimei, Hashabiah, and Mattithiah, six, under the direction of their father Jeduthun, who prophesied with the lyre in thanksgiving and praise to the Lord.

The first comes from the time when David was arranging the Priesthood and their various ministries once there was a permanent home for the Ark of the Covenant in Jerusalem. The old duties of setting up and tearing down the Tabernacle and carrying its furniture about the desert had come to an end. But these Levites still needed to be employed according to their designation as those set apart to God to minister to Him and His people.

The second comes from the time when the priesthood of the Believer is emerging. There will no longer be a specific “tribe” to serve as ministers in God’s house. And Paul makes the bold assertion that “you can all prophesy one by one” – even though there is still the issue to be resolved as to whether or not there are still “prophets” in the Church.

That said, the Chronicles passage tells us how it at least some of the Levites were to prophesy: “With the lyre in thanksgiving and praise to the Lord.” And is it possible that Paul has something similar in mind when he says we can all prophesy one by one? It’s worth considering.

In other words, at least one aspect of prophecy which belongs to all the saints, even today, is to prophesy by giving thanksgiving and praise to the Lord. And the idea of using the lyre is that this prophesying is done in music. And here is the wonder of that thought: When Christ’s people gather to worship, and we sing songs of thanksgiving and praise to the Lord, we are not just performing some meaningless Church activity. We are engaged in a high spiritual ministry aimed at teaching and encouraging one another in the power of the Spirit. It is why the lyrics we sing are so vitally important – that they convey accurate, BIblical truth about God and His works; and that they acknowledge the blessings He has poured, and continues to pour out upon His people.

Next Lord’s Day, when you come “to Church” – don’t imagine the music portion as just some sing-songy tradition. Come ready to prophesy. To lift up the name of the Lord to those around you. To help them know the wonder of our God in Jesus Christ – and give Him the thanks publicly that is due Him.

Come and take up the prophet’s mantle for us all.