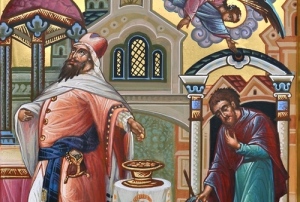 Luke 18:9–14 (ESV) — 9 He also told this parable to some who trusted in themselves that they were righteous, and treated others with contempt: 10 “Two men went up into the temple to pray, one a Pharisee and the other a tax collector. 11 The Pharisee, standing by himself, prayed thus: ‘God, I thank you that I am not like other men, extortioners, unjust, adulterers, or even like this tax collector. 12 I fast twice a week; I give tithes of all that I get.’ 13 But the tax collector, standing far off, would not even lift up his eyes to heaven, but beat his breast, saying, ‘God, be merciful to me, a sinner!’ 14 I tell you, this man went down to his house justified, rather than the other. For everyone who exalts himself will be humbled, but the one who humbles himself will be exalted.”

Theology comes to us in more than one form. When most of us think of that word “theology” – we most likely think in terms of doctrinal or propositional statements or truths. Fair enough. That is the context we most often hear the word used in. But in truth, whether we know it consciously or not, or can articulate it systematically or not – we all have a “theology”. An understanding of God and general truth about God, ourselves, and the world we live in.

In this parable, Jesus contrasts two very different theologies. One, from a Pharisee, one we might consider theologically astute. He would have been self-consciously theological. He studied the Law of Moses, and the writings of the great Rabbis and Jewish teachers. He had a grasp of what he would reckon was Biblical and theological truth. A good, thorough-going, devout, religious guy. The other, is identified simply as a “tax collector.” For all intents and purposes, not someone who would think of himself as a theologically astute person. Who most would consider “wordly”. Not well versed in Jewish theology, if interested at all. And yet here they both are – in The Temple, and doing their religious duty.

People who wish to justify themselves, like to compare themselves to others, and to catalog their goodness. People who look to be justified – declared righteous before God in Christ – simply look for mercy, because they know they are not worthy. And Jesus says, it is the theology of the second man that wins true justification. Oh, how our God loves to show mercy. And a slavtion which is not rotted in mercy on the undeserving, is no salvation at all.