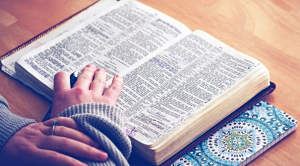 We are reading the Bible through together this year, using the Discipleship Journal Reading Plan published by the Navigators. You can download it free of charge from: https://www.navigators.org/resource/bible-reading-plans/

We’ve come to the end of our readings for March, and have a few days of catch-up time before we move on into April. And we’ve seen an awful lot so far. If you’ve kept us, you’ve finished the entire Pentateuch. Many are the Christians who sadly have never read those first five books of Moses completely – even though they are foundational to everything which comes after. We’re also nearly 1/2 the way through the Psalms. Perhaps you’ve read some you’d not visited before. You’ve completed the Gospel of Matthew and the magisterial letter of Paul to the Romans. And it is to Romans I’d like to turn our attention briefly this morning.

Paul, inspired by the Holy Spirit built a very interesting feature into this letter – bookends. In opening this letter in Ch. 1 he describes his Apostolic call this way: Romans 1:5 (ESV) — “we have received grace and apostleship to bring about the obedience of faith”. Then in Ch. 16 he closes the letter stating: Romans 16:25–26 (ESV) — “Now to him who is able to strengthen you according to my gospel and the preaching of Jesus Christ, according to the revelation of the mystery that was kept secret for long ages but has now been disclosed and through the prophetic writings has been made known to all nations, according to the command of the eternal God, to bring about the obedience of faith.”

The obedience of faith. What is it?

And quite simply it is 2 things – 1. It is a call to obey the Gospel, by believing it. Rom 10:16 cites the problem of the Jews as being: “But they have not all obeyed the gospel. For Isaiah says, “Lord, who has believed what he has heard from us?” John picks up that same theme in 1 John 3:23 “And this is his commandment, that we believe in the name of his Son Jesus Christ and love one another, just as he has commanded us.” All of which springs from Jesus Himself who makes believing the Gospel foundational to repentance itself: Mark 1:14–15 (ESV) —  “Now after John was arrested, Jesus came into Galilee, proclaiming the gospel of God, and saying, “The time is fulfilled, and the kingdom of God is at hand; repent and believe in the gospel.” To fail to believe the Gospel, is to remain in rebellion against God. Our first sin in Adam was in not believing God – that He was good in His prohibition against the fruit of the Tree of the knowledge of good and evil. To not believe that we would die if we disobeyed. Indeed, we are responsible to believe everything He has revealed. This is why faith is the means He has appointed to bring us to salvation – we must repent of our unbelief, and believe Him. Abraham believed God, and it was counted unto him as righteousness. This is salvation 101.

2. The obedience of faith is a lifestyle that corresponds to what God has revealed. Faith ultimately is believing what God has said is true, and ordering our lives according to that truth. James tells us unequivocally that one who says they believe but does not live accordingly, has a false faith, a faith that cannot save. Paul is not interested in jus getting people to sign on to his concepts – he is committed to bringing people into discipleship to Jesus Christ. To be whole, integrated people. People whose beliefs and lives correspond.

So how about you today? Have you believed the gospel? Fantastic! And having believed what God has revealed, are you endeavoring to live a life that corresponds to what you believe?

See you in April. At which time I hope to be bringing you these installments via video as well. Stay tuned.