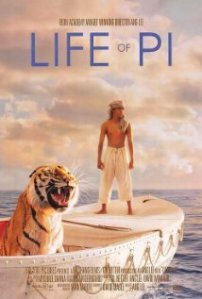 The film adaptation of Yann Martel’s 2001 fantasy adventure novel by the same name is interesting to say the least. No less a personage than President Barak Obama pronounced it “an elegant proof of God, and the power of storytelling” – in a personal letter to the author. And while both the book and the film have been met with broad critical acclaim, I must confess I was not as wowed as so many seem to be.

Life of Pi’s protagonist is a young Indian man by the name of Piscine Molitor Patel – Pi Patel for short. Growing up in Pondicherry India in the early 70’s, his “religionless” father runs a zoo. Living life with his older brother and mother as well, Pi is culturally raised as a Hindu in spite of his father’s bent against any religion, and notes that he first meets “god” through one of the 33,000,000 Hindu gods. At 14, he is introduced to Christianity, where he likes the figure of the Son of God, but thinks the idea that he would be punished for the sins of guilty men by The Father is nonsense. Later, he also delves into Islam, and tries to live a life with these 3 conflicting worldviews meshed into one.

As the story unfolds, the family is forced to close the zoo, and Pi’s father arranges to move the family and the animals to Canada. Once all are on the journey, the ship encounters some unknown trouble during a storm and sinks. The only survivors are Pi, a hyena, an orangutan, a zebra with a broken leg and a large Bengal tiger named Robert Parker. These 4 are adrift at sea together. It isn’t long before the hyena makes prey of the injured zebra, and then the orangutan. Richard Parker dispatches the hyena, and the balance of the story is Pi surviving for over 200 days adrift with Robert Parker. After plenty of harrowing circumstances (as one might expect with these dynamics) Pi & Robert Parker have a short reprieve on what turns out to be a “carnivorous” island. Realizing they cannot remain there, the two take to the sea in their lifeboat once more, finally washing up on the shore of Mexico. Robert Parker takes his leave into the jungle, and Pi is discovered by some men and taken to a hospital. Whilst recovering in the hospital, Pi is visited by investigators of the Japanese ship owners looking for answers as to why their ship sank. Pi recounts his unlikely tale which is met with appropriate incredulity. Finally he fesses that in fact, the “Zebra” was a sailor who broke his leg jumping in the boat. The “orangutan” was his mother who also got into the boat. The “hyena” was the vile ship’s cook, and the tiger, none other than Pi himself. And the bottom line for Pi, is not – which story is true – but rather, which one would you rather believe?

Ultimately, the reality is, there are unknown reasons behind much of life – especially great tragedies –  and religion is our way of trying to make sense of those inexplicable things. In the end, we each simply pick the religious version we prefer most, to deal with the fact that there are no real answers.

Whether or not the movie stayed true to the original novel, I am not in a place to comment on having never read it. But in terms of reviewing the movie on its own, it seems best to examine it three ways: Cinema-graphically, Philosophically and Theologically.

Cinema-graphically, the film is a fine example of deft story telling. Reasonably developed characters, believable interactions, and a story to be told which unfolds naturally. But it was also slow. So far so good. I guess.

Unfortunately for me, while the visual effects are highly praised, I found them less compelling than most reviewers. Oddly (since this is most highly lauded by others I read) it failed most in the CGI tiger. Not because he didn’t look “real” enough as though physically there, but because he wasn’t real enough in his wildness (for lack of a better term). There was no real fierceness there. He was (as were all the animals) a bit too humanized. Given the pantheistic backdrop of Hinduism, I suppose this is to be expected. So, to be fair, this may have been on purpose. After all, the tiger is a metaphor for Pi himself. He is meant to be the “beast” in Pi, and thus part of the circle of life and thus also sharing human tameness. I’ll give it the benefit of the doubt. But it failed there for me. But there was never any “real” danger conveyed. Richard Parker wasn’t a wild beast, he was a big, somewhat testy cat.

Philosophically, make no mistake, this movie clearly communicates a pantheistic worldview, where individual meaning is found in our adoption of which “story” sounds most inviting to us, while we remain void of any real answers to life’s great mysteries. Life just is what it is. We live it, are exposed to it, and we invent various scaffoldings to give mystery a structure we can hang on to. Cycles of life and death, just are. Wildness and humanity are all just varying shades and manifestations of the same whatever “is”. As the movie version ends with Pi telling the two stories to an author who wants to write the story, Pi’s wife and children arrive. Surprised to find out he is married and has kids, the author says to Pi “then the story has a happy ending!”. Pi says the ending is really up to author, it is “his story” now. Truth is irrelevant. It is all how you want to see it. All of reality is just how you experience it, and choose to interpret it.

This pantheism is not only the philosophical worldview, it is also the movie’s theological base. Not only is reality simply what you experience in life and how you interpret it – God is as well. Hence the attempt to merge Hinduism, Christianity and Islam into one thing for Pi. Each is useful in providing a story to make dealing with the mysteries of life palatable. There is no real, objective “God” who created all things and imbues them with meaning by virtue of His creatorship. Things just are. And we supply a self-invented “god” to help us make sense of what is unfathomable.  So “god” may be Vishnu, Krishna, Allah or the Son of God. Each is simply a useful framework wherever most needed and best suited.

In a telling family dinner conversation, Pi’s Dad challenges his acceptance of these three conflicting religions. He sees the incongruity and tells Pi he cannot cling to all three. Pi simply queries “why not?” His father has no answer, and we are to suppose that the question cannot be answered in a negative way. The idea that mutually exclusive concepts cannot all be true is simply dismissed out of hand as though it is silly to even think such a thing. If I want to believe  2+2 = 4, AND 2+2 = 13, AND 2+2 = 1394 – who’s to say I cannot believe that? Given any particular circumstances, it might be advantageous to hold one or the other as the situation calls for it. And so it is there is no “truth”. There is what works for me in a given circumstance. Whichever version pleases me most at any given time. Which, to put it simply, is just plain nonsense.

Let’s apply Pi’s (Martel’s) approach to language for instance. What if in telling the story, I prefer that P is really Q and I is L. In fact, let’s substitute letters or symbols at our individual pleasure to communicate any concept. And so write “I love you” with *mmqrs%$. Which of course I can also write kkkkkkkk. Maybe I can ever write it “I loathe you with every fiber of my being”. Who’s to say? Can any real communication ever take place like that? No. Without establishing forms which remain and are mutually agreed upon, communication of any kind is impossible. Now apply that idea to theology – let god be whatever we imagine him or it or her to be at any time under whatever circumstances we prefer at any given time, and all of us do that together, and there is no “god”, because all must be the same. Bingo! Theological pantheism at its rawest. Everything is god and god is everything, atomized or congealed. And thus, there is no god, there is just the story – which you can write or alter at will. No truth. No real reality. No God. No meaning. Just each individual’s imaginative attempt to give meaning where none exists.

It would be hard to think of a more anti-Christian worldview than the one espoused in Life of Pi.  It certainly captures the current trend in world religion, to attempt unity in all religion – but it fails miserably, as it is ultimately incomprehensible drivel. It is nonsense. It is a lie.